By now you’ve undoubtedly encountered the new term “Latinx,” coined as a gender-neutral alternative to “Latino” and Latina” to refer to persons of Latin American descent. But where did the idea of “Latin” America come from in the first place, and when did we start calling it by that name? After all, the lands south of the U.S. border were not settled by the Romans. And why do most New Mexicans of Spanish ancestry refer to themselves as Hispanic or Hispano, rather than Latin-anything?

True, the dominant Romance languages of the region—Portuguese in Brazil, French in several island nations around the Caribbean, and Spanish nearly everywhere else—all evolved from Latin. But oddly enough, the idea of Latin America as a geographic entity originated not in the Western Hemisphere, but in France, around the middle of the 19th century. It first appears in the writings of a French economist, Michel Chevalier, who spent a couple of years traveling in the U.S., Mexico, and Cuba, and published an account of his observations in 1836. As Chevalier saw it, all the nations whose languages and institutions derived from ancient Rome, and their former New World colonies, shared a common culture and a common destiny as the torchbearers of western civilization—led by France, of course.

Many intellectuals in Mexico and South America embraced the idea. With Spain and Portugal now out of the picture as colonial overlords, they did look to France as a leader in the world of ideas, culture, and the arts. They were also wary of the growing power of the United States, which had already gobbled up half of Mexico and was casting a covetous eye on the Caribbean. The possibility of a confederation of “Latin” countries united against the Colossus of the North had wide appeal. Still, use of the term “Latin America” was mostly confined to the intelligentsia until France decided to assert its cultural preeminence by invading Mexico in the 1860s.

Mexico had been in a more-or-less constant state of political and economic chaos since gaining her independence in 1821. She was heavily in debt to France and several other European nations. Using that as a pretext, France’s self-proclaimed Emperor, Napoleon III (nephew of the more famous Napoleon I who met defeat at Waterloo in 1815) dispatched a 34,000-man army to the Gulf Coast port of Veracruz and then to Mexico City.

They suffered a setback near the city of Puebla, where, on May 5, 1862, they were soundly beaten by a much smaller Mexican force under the command of General Ignacio Zaragoza. That victory is still celebrated as Cinco de Mayo. But the French recovered from their defeat and went on to occupy the capital.

In an effort to legitimize this arrangement, French propagandists waved the banner of “Latin America” as a cynical ploy to forge a common identity with the people whose country they had just invaded. They rebranded themselves as liberators, one Latin nation coming to the aid of another. Mexico, they said, simply needed a strong hand to guide her and help her get back on her feet financially. Napoleon III obligingly provided one: a young Austrian archduke named Maximilian whom he installed as his puppet ruler. Mexico’s conservative faction, consisting of wealthy landowners and the Church, fawned over their new sovereign.

But Mexico’s elected president, Benito Juárez, wasn’t buying any of it, nor was most of the rest of the country. Parlor discussions about Latin unity were one thing; French troops on Mexican soil were something else altogether. Juárez went into hiding and for the next five years the stern-faced Zapotec Indian lawyer, in whose veins no “Latin” blood flowed, maintained a government in exile and waged constant guerilla warfare against the invaders. Meanwhile Maximilian I, Emperor of Mexico, and his wife, the Empress Carlota, held court in Mexico City and endeavored to bring civilization to the benighted Mexicans, blissfully unaware of how precarious their position really was.

Maximilian’s empire was short-lived. In 1867, with the Franco-Prussian War looming at home, France withdrew her troops. Without their support Maximilian’s government quickly collapsed. Juárez returned to power and promptly had him shot by a firing squad. Carlota went mad with grief. But the idea of Latin America has survived, probably because of its usefulness as a convenient collective label for the diverse nations south of the Rio Grande.

Of course, by the time the French Intervention occurred, New Mexico was no longer part of Mexico. The separation predated the popularization of the notion of Latin America by more than a dozen years, which is probably why the ethnic identifier “Latino” isn’t commonly used here. As for “Latinx,” it remains to be seen whether it will catch on, or go the way of “Chicano,” which was in vogue 40 or 50 years ago but is infrequently heard today. 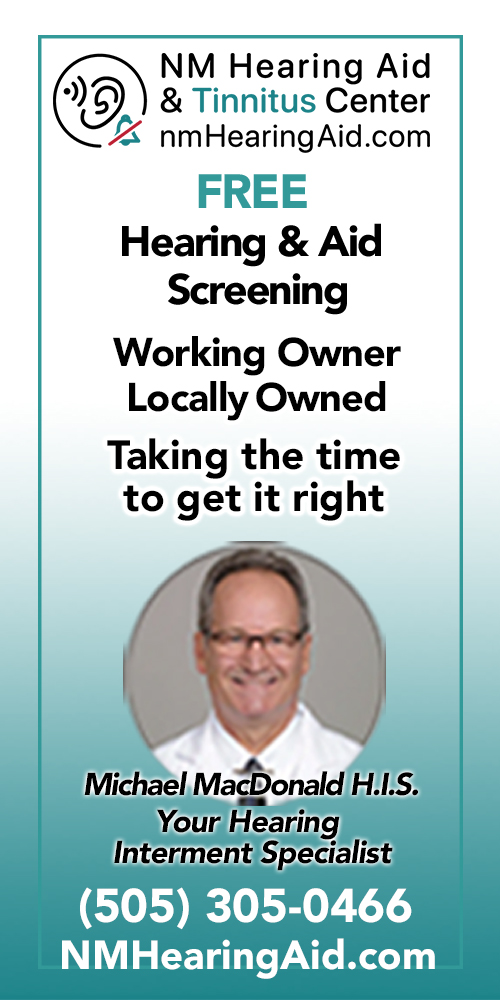 Dashing through the Snow

By Dr. Gerard Muraida “Dashing through the snow, in a one-horse open...
blastoff
Savvy Senior

By Jim Miller Dear Savvy Senior, What are some of the best travel...
Dana Benjamin
Uncategorized

Treating Your Dog To A More Healthful Life

By Beverly Custer Having been raised with animals in a rural New Mexico...
Dana Benjamin
Cover Stories

By Mary Ann Hatchitt Beyond the thermostat, nothing says summer like the...
Dana Benjamin
The Doc Is In

The Heat is On